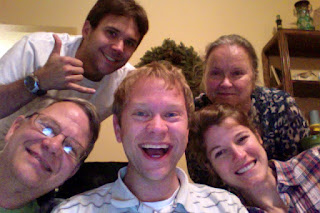 Grace.  What an amazing word, right?  It is one of the many reasons I believe ordination in the United Methodist Church makes sense.  I included a picture of me and (some) of my family because it is in the family I best find grace personified.  Family is also a word I would use to describe the United Methodist Church - hence, this post.  Keep reading.  I'll tell ya what I mean.

I've already talked about why I think Ordination is a response to calling.  Now I want to talk about grace.  I want to come at it from two angles.  First, realization of grace as primacy for pursuing ordination in the United Methodist Church and second the theological underpinnings for it.

Let me be honest: I'm not perfect.  Sure, you've heard people say it before, but perhaps not in the context of becoming ordained.  Basically I see ordination as a welcoming (as I am) into a family.  That word carries a lot of meaning for folks and perhaps you'd like to know where I come from with it.

My family means the world to me.  We might not talk every day but I can't emphasize enough that I've received amazing grace within my family.  I wish everyone could, and that is one reason I'm ordained.  I can't in good conscience act like Paul and say that I am somehow "chief among sinners" but I've certainly had my share of failures.  Whether it is harassing my little brother, worrying my parents, or being myself around my wife - I fully comprehend the fact that I don't love the way Christ has loved me.  This simple realization in light of the love I've been shown within my family means that I have been shown amazing grace.

Grace of course is receiving that which you don't deserve.  There is a switchfoot song which says, "The beauty of grace is that it makes life not fair."

I know a multitude of Christians who hold fast to the very notion that God will be just.  What they imply when they say that isn't that God will make things right (the ultimate end of Justice, by the way) but that people will get what they deserve.  This can either be directed towards sinners (who are, always, outside the blessed circle of Christ by their estimation) or oppressors who divide and conquer and ultimately work against God's will.  Instead, God's love is for those who get it right.

Hogwash.  The good news is precisely for those who are sick.  It is the proclamation that God loves (and will redeem) the ones who do not find justice.  God makes life not fair.  Grace.

For me, ordination means that even in light of my imperfection I am accepted and even encouraged to distribute this amazing Gospel.  The United Methodist Church has ordained me, flaws and all, to do the work of the Church through Word, Sacrament, Order, and Service.

This doesn't immediately follow to ordination (indeed, not everyone is ordained) but for me it has.  My ordination is, as I see it, a measure of grace.  With my ordination comes a healthy encouragement to seek perfection.  Perfection!  Look like Christ!  Eschew the faults that I cling to so dearly!  This reminds me of how my family works, actually.

That is the first realization.  The second is that the theology of grace in the United Methodist Church is a fantastic reason to pursue ordination.  What I mean is that I think the theology is sound because it lifts high the grace of Christ.

Plenty can be said to the faults of the UMC.  Plenty if examples may be given to how the hierarchy,  bureaucracy, and general "status quo" of an institution hold the Holy Spirit down.  I wouldn't discount those, they just aren't my story.  Sure - I wish things worked faster and better - but how many mistakes have been avoided because of the "system" of the United Methodist Church? (no doubt, mistakes have been made because of it!)  How many people have found love because our "system" won't allow us to hate on them?  How many have heard the fantastic admission that we don't have it all figured out and we are working towards it?  We aren't there yet...

And so what does the United Methodist Church need?  The very thing we hold in such high esteem.  Grace.

Theologically, we can't call ourselves Wesleyan without appreciating the grace of Christ.  I won't go into huge detail here but Methodists love three kinds of grace: prevenient, justifying, and sanctifying grace.  ALL of these are at work in the Church and that makes ordination worth it.

I think the theology of the United Methodist Church is the best theology to pursue the Gospel.*  We are Methodical, driven, and in our best moments dependent on the grace of Jesus to bring the Kingdom of God to this planet.  Faults and all.  Just like me.

As will be discussed in future posts, the United Methodist Church appreciates personal holiness and social justice - our relationship with God and each other stretches beyond the bounds of the individual soul or the walls of our local congregation.  Doesn't that sound like a Gospel worth proclaiming?

I joke with people that everyone ends up United Methodist eventually.  Whether it is because we need a bigger concept of family or because we admit our own hang-ups, there can be no denying that (so far) Methodism continues to achieve a breadth of inclusivity and conviction that defies stereotypes.  Ordination is one way that allows me to pursue that theology and the people who need to hear it.

* - Don't hear me wrong.  Jesus is in lots of places and other folks have it "right" too, I'm just saying that for me, Methodist theology continues to be proven a wonderful way to know an unknowable God. Also, I fully admit that there are places that Methodism falls short for some people.  When we can judge God's love from the love of Christ and not those who follow him, we find amazing grace.  Doing so can help us all forgive others shortcomings and find the system isn't the problem - it may be ourselves or the people who make that system a reality.  Hence, we need some grace to love like Christ.