Meaning.  There are pastors and Christians who will tell you that you can't find meaning outside of Jesus. 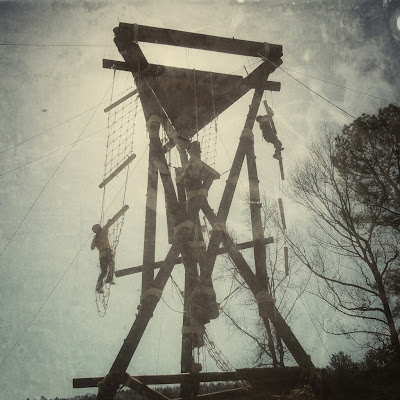 I could pitch you all these Christian platitudes about how empty life is without Jesus.  I can describe for you the meaning I derive from my relationship with Jesus and how because he lives I can face tomorrow.  Really, I could, because they are real for me - but if they aren't real for you, why the heck would you care about them?

At BSC I constantly interact with students who are looking for meaning everywhere - not just in books.  Or THAT book.  When the church says that it is the only place you can find meaning in life (via Jesus), that just sounds pompous to a lot of young people.  From their standpoint it just isn't true.  They find meaning in LOTS of places.

The question isn't whether you can find meaning somewhere.  The real question is where do you find the most meaning?  What is the ultimate reality?  This is why the cross is so important to Christianity - because in it we see what reality is supreme.  Violence or non-violence?  Fear or faith?  Despair or hope?  Hate or love?  Evil or Good?  Christ's response to evil is not more evil...it is the ultimate good.  There is more meaning in Christ's life, death, and resurrection than in any violent, coercive, or manipulative act. Being clergy is, for me, the best way to live into the goodness of Jesus Christ.  Being a pastor doesn't afford me many opportunities to be violent or manipulative (Helloooo, this is why we have the SPRC!) and I hopefully don't use my position to be coercive.

Meaning in life is precisely why I am ordained and believe it is a worthy pursuit in this day and age.

Recently at BSC we, as a community, read Dr. Martin Luther King Jr's Letter from the Birmingham Jail.  It is a timeless letter that eloquently addresses the tension within Christian community when injustice is rampant and we use God to back it up.

As a (somewhat) moderate (very) white (naive) clergyman, the letter is, to say the least, challenging.  I read a letter like this and try to remember that these were real people in a real world where folks were literally oppressing their fellow humans and trapped in their own need to oppress.

I wonder what I would have done if placed in the same position as those clergy who put their names on their plea for MLK to chill out.  To read MLK's response letter now is nothing short of a theological smack-down.  The kind done in love and with such grace that who could argue to see the truth in it?  I know there are those that saw the truth in it and unfortunately chose not to celebrate it.

My church was on the wrong side of that letter.  As an institution we have not one, but TWO bishops listed who would rather plead for peace than justice.  I know they meant well, but don't we all?

Why do I think ordination in the UMC means anything or adds any meaning?  Because the challenge excites me.

I want to belong to a church that...
...can stop saying, "wait"to those who are oppressed.
...is more devoted to justice than to "order."
...encourages good people to speak and act louder than the hateful words and actions of bad people.
...uses moral means to preserve moral ends.
...claims the gospel brings real concern to social and economic injustice.
...heals and mends the body of Christ through social nonconformity.*

I know what you are thinking - "Jack, you are arguing for following Jesus, not ordination in the Church."  Well, here is where the two meet for me: anyone can follow Jesus and in so doing be the movement of the Spirit.  Only those leading within an institution can bring that institution along to  obeying just laws and disobeying unjust laws.  While I confess the UMC is often more an institution than a movement, I'd like to see them one in the same.  I can't make that happen from the outside.  Either the church leads with divine purpose to free the oppressed or it gets swept away by the tide of this generation into the backwater of complacency and impotence.

Let me say it another way... I don't know yet where my test will be but I want to be ready.  I pray that it will be soon coming and in the same breath pray it never arrives.  I hope to bring the church (kicking and screaming if needs be) to where it truly belongs - in the image of the living God.

We see glimpses of another world when we are faithful.  I'm ready to live into it.

* - These are adaptations from MLK's letter in what he sees as the deficiencies of the moderate white churches.